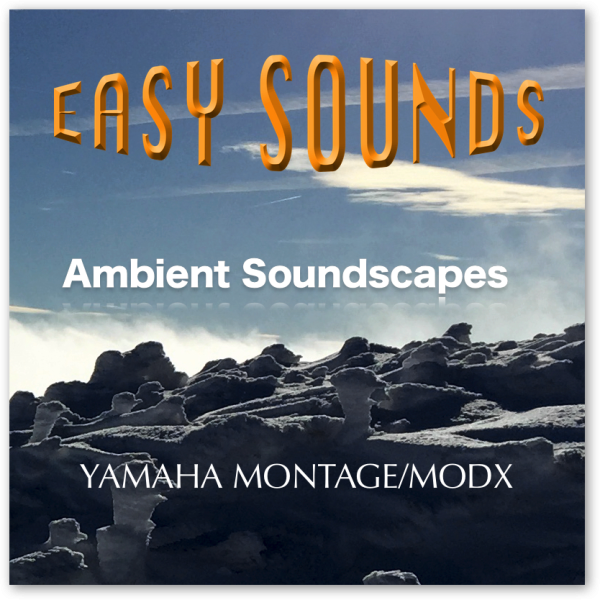 The 340 performances from "Ambient Soundscapes" can be used for many music styles: Ambient, Chill out, Film music, Meditation, as well as all types of Electronic Music which use spheric atmospherics and soundscapes.
The name "Ambient Soundscapes" says it all.
The focus of this soundlibrary are mysterious, deep, mystical and naturalistic soundscapes. In addition to the fascinating sounds of granular synthesis, the library includes high-quality recordings of sea waves, snowsteps and many other sounds associated with the element "water". These are often alienated and combined with atmospheric surface sounds for musical use. The library also includes effective synthesizer sounds and arpeggios from the synth comp, synth lead, musical effects, bass, keyboards and drums categories.
As with all current EASY SOUNDS Libraries, a special highlight are the complex Multi Part Performances. These usually include 8 Parts and 8 Scenes.
"Ambient Soundscapes" contains three groups of complex Multi Part Performances:
Performances 1 - 8 = FULL RANGE
These Performances can be played intuitively over the entire keyboard. The 8 scenes contain complex, dramaturgically structured arpeggio arrangements.
With few active parts, the first scenes are particularly suitable for intros and quiet phases. The following Scenes are designed with an increasing number of parts for "bridge" and "main".
Performances 9 - 32 = SLIDER
In these Performances, the arrangement is essentially created by a Live Mix with the Sliders and Assignable Knobs of the MONTAGE / MODX/MODX+. The Scenes are mainly used to switch the arpeggios of the drum parts, while the other arpeggio parts contain the same or a very similar arpeggio. In contrast to the other groups of Multi Part Performances, all Parts are always active in all Scenes, if the respective Slider is not set to 0. After selecting the Performance, only a few Parts are initially active. With the sliders, further parts can then be gradually faded in.
Performances 33 - 40 = KEY SPLIT
These Performances are designed as traditional KEY SPLIT Performances and are more suited to keyboardists who want to focus on playing with their left hand for chord-driven accompaniment and their right hand for leads - similar to Portable Keyboards styles.
Ambient / SFX Performances
A main emphasis of this library are the atmospheric Ambient / SFX Performances based on the new Samples, located in the "Musical FX / Moving" category. These performances usually use two elements: Element 1 contains an atmospheric synth pad, Element 2 contains a sample-based ambient / SFX sound.
Many of the performances in the "Syn Lead / Electronic" category are also atmospherically oriented and combined with sound effects. In contrast to typical Synth Leads, these sounds can also be played polyphonically.
Drum Kits and Drum Arpeggio Performances
This library contains the Ambient Drumkits 1 + 2, which are the base of all in all 57 Drum Arpeggio Performances using different arpeggios and effects.
The names of these Drum Arpeggio Performances are preceded by "Kit1..." or "Kit2..."refering to one of the Ambient Drum 1 or 2.


"Ambient Soundscapes" is the result of the work of two experienced sound programmers who worked together intensively for almost half a year on this library. With this work, Peter Krischker and Matthias Sauer are celebrating their 30-year collaboration!

• This product is designed exclusively for the Yamaha Synthesizer series MODX/MODX+ and MONTAGE. It is not compatible with the Yamaha Keyboard series like Genos, TYROS or PSR series!