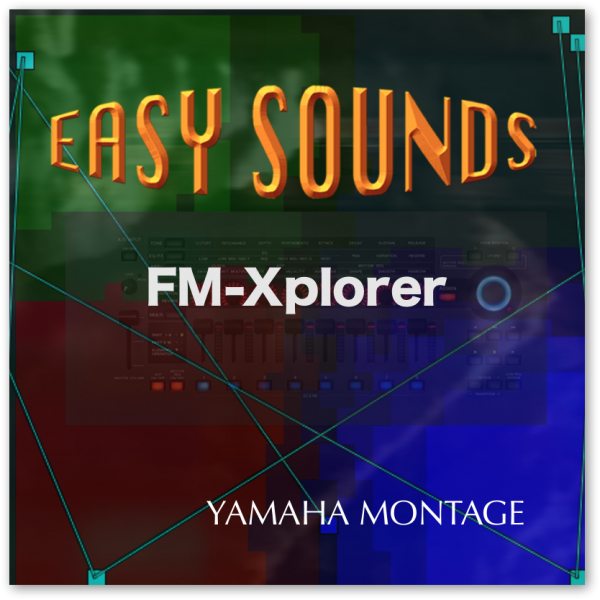 "FM-Xplorer" is a comprehensive FM-X soundlibrary based on the new Smart Morph technology (from MONTAGE firmware 3.5). Typical Smart Morph Sounds are an essential focus of the library. However, conventional standard FM-X sounds are also represented, partially created as extracts from Smart Morphs.

In contrast to the "FM-Xperience" library, this new library is not designed as "puristic FM".

FM-X parts were combined with AWM parts in many Performances.

In complex Multi Part Performances, the Smart Morph Part (Part 1) has been completely programmed from scratch. In other Parts 2 - 8, elements from Preset Performances or earlier EASY SOUNDS libraries have been partially adopted as well as modified versions.

Special highlight of the library are 41 Step Morph Performances, including a special application of the new Smart Morph function. In this case Morphing is not applied as a flowing sound structure. Instead, Smart Morphs are controlled by a Super Knob Motion Sequence (Knob Auto) with Hold Events, which runs in sync with the tempo and the Arpeggio Parts. This creates a new type of wave sequencing that clearly stands out from previous results of this sound type.

Parallel to the Super Knob Motion Sequence, Part Motion Sequences are often used to create a percussive character of the steps or a lively auto panning.

The Step Morphs are most impressive used in the complex Multi Part Performances 1 - 28. In this Performance types Part 1 (Step Morph) has been combined with seven other parts. Main focus is on the musical and creative usage. The Step Morph Sequences are used mainly in the first scenes, where a limited arrangement is used.

Opposite to the „Step Morph Performances“, "Touch Screen Performances" (129 - 160) do not use automated Smart Morph processes. The control can be done manually via touch screen by moving the blue cursor on the grid "Smart Morph - Play".
The Motion Sequences are removed in this new performances. The Super Knob is not used for Smart Morph, but for other sound parameters, usually for the FM intensity (output level of the modulators).
The dimensions of the modulation far exceed those of the Super Knob Link, as there is access to the entire area of the respective Smart Morph Map and not only to a defined axis.

Performances 1 - 14 are designed as LIVE MIX Performances. Starting with Scene 1, the Sliders and Assignable Knobs can be used to create an individual, intuitive and flowing arrangement in realtime. Alternatively, the 8 Scenes with pre-programmed mixings can be selected.

Performances 15 - 28 are designed as more conventional KEY SPLIT Performances. They are more suitable for less experimental keyboard players who want to concentrate on playing with the left hand for chord-controlled accompaniment and with the right hand for leads - partly similar to Keyboard Styles. These Split Performances are based on the LIVE MIX Performances, which can be recognized from the corresponding Performance names. "MIX" means "LIVE MIX" and "KS" means „KEY SPLIT“.

This product is designed exclusivele for the Yamaha Synthesizer series MONTAGE and MODX.